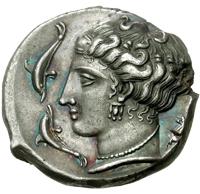 On Tuesday, 10 May 2011, Oliver Simkin, postdoc at the Roots of Europe project, will be giving a talk for the Linguistic Circle of Copenhagen on the linguistic clues and gems Sicilian coins from the Classical Era have to offer.

The coinage of ancient Sicily is a vital source of information about the complex linguistic situation on the island. There are inscriptions in at least five different languages, including the only bilingual texts from the classical period, and over a short space of time the coins of a single city can switch between three different languages. 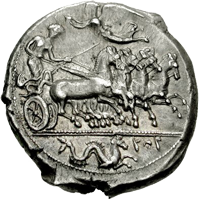 Coin legends are inevitably fairly short, and their content is limited, but they are especially crucial for our knowledge of the poorly-attested indigenous minority languages of Sicily, and even offer surprises in Greek and Phoenician.

The Sicilian material is also important for the study of coin inscriptions in general, since it provides a valuable insight into the conventions and motivations which determine the content of these texts.

Organizer: The Linguistic Circle of Copenhagen