>> Back to the frontpage
>> Short description of the subject 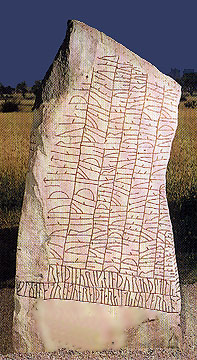 The Rök Runestone - almost four metres tall - was made about 800 AD and is situated next to the church of Rök in the Swedish province of Östergötland.

The stone is renowned for having the longest runic inscription of the entire world, almost 760 characters. Also, the text is considered to be one of the earliest examples of writing in the Old Swedish language. A transliteration of the text, mainly carved in the Younger Fuþark (runic alphabet with 16 characters), may be found here.

Roots of Europe also concerns itself with the oldest Germanic languages, especially by means of the subproject:

>> Back to the frontpage